Who is the man that consistently sells out all of the sophisticated & chic venues throughout North America like City Winery and legendary venues all around Europe like The Jazz Café in London for several consecutive nights?  Dwele (pronounced dwell-lā ) hails from the legendary music mecca of Detroit, lives a life in song. From stirring melodies composed on piano keys, he writes poignant music, performs with natural grace and captivates with his clear, silky tone. He is a songwriter, producer, multi instrument musician and vocalist carrying on a Motown-inspired tradition instilled in another era. Yet Dwele has cultivated his own spirited road with five critically acclaimed albums “Subject”, “Some Kinda”, “Sketches Of A Man”, “W.ants W.orld W.omen” and “Greater Than One” behind him. His Motor City story in sounds and upbringing resonates with genuine soul and he’s in full stride of scribing his own musical legacy.

Dwele was brought up in a highly musical family that was tragically pared down to his mother and younger brother, once his father was gunned down outside their home. Dwele was only 10. “The loss of my Father really inspired my creative side,” Dwele recalls. “By getting into music, it provided me with a way to cope with his death.” Dwele’s music impresses with maturity beyond his years. He captures the rawness of inner city blues with hip-hop nuances that speak to his generation and beyond. His ear was shaped by Donny Hathaway, Marvin Gaye and Miles Davis, which his family played regularly in their home. What is most compelling about Dwele's work is it’s timeless nature and the fact that he remains loyal to his foundation.

As a multiple Grammy Award Nominee and a shared win with legendary rap icon Kanye West for "Flashing Lights" on his Grammy Award winning "Graduation" album he has blazed a trail for this generation’s newfound Soul/ R&B era.  Although being the humble young man that he is, Dwele says  “…No matter how many Grammy Nominations that I receive, I’ve always repped Detroit to the best of my abilities. That feeling is like exhaling, to be home while riding in the car upon my return. I see the sights and I’m back,” he muses. “When I sit down at the keyboard, as soon as I get home, the material just flows out.” Dwele has toured around the globe with sell-out crowds in his wake and still seems to mystify his audience, which makes them eagerly anticipate what his next move will be. Deemed by media queen Wendy Williams as one of “Big R&B’s, Best Kept Secrets", there’s no doubt he has surpassed the benchmark of just getting a "Hit Record" but more so a "Hit Career.”

With all of that said… It’s no wonder why he was the first one chosen by McDonald’s as their National Brand Ambassador for the “face and voice” of their launch of McCafe in North America. With a multitude of television appearances on Jay Leno, Jimmy Kimmel, MTV Base in Europe and the BBC Studios Live, Dwele shows no signs of slowing.  Especially since “...Heʼs The Peopleʼs Choice” says Ronald “Ron E.” Estill, head of REvision / Rt Music Group, who has guided his career since inception, “it’s been proven by the rave reviews for ALL of his albums.” So, itʼs hard to even imagine when he says that “His Best is Yet to Come...”

It must be a challenge to try and out-do yourself, when you are indeed the one who sets the bar of expectations in your musical genre. So for now we all must just anxiously await for his next arrival to our town while his latest, delicious musical servings... “Wanna Dance” feat the Legendary Phife Dawg (ATCQ) & Mike City, his smash-single "Winter White Nights" and Newly released Featured Collaborations with Common “HER Love” and  Big Sean’s #1 Release “Everything That’s Missing” are streaming & airing on a daily basis!!!!! 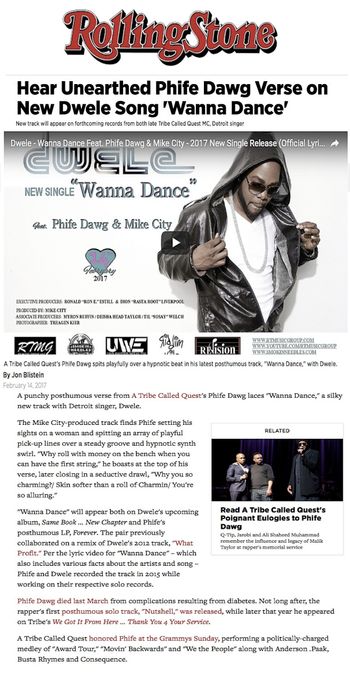 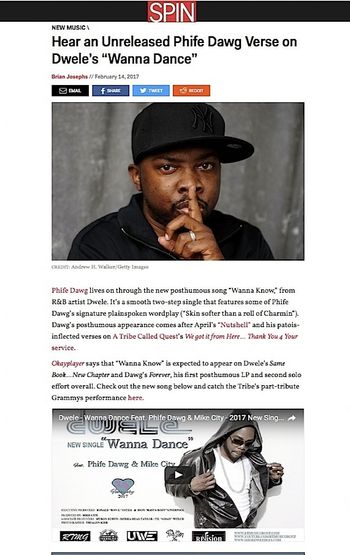 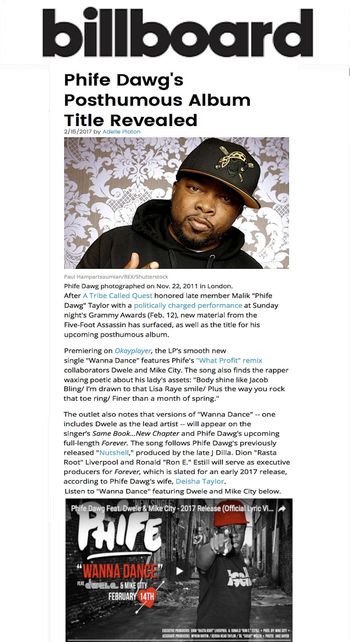